I have been skeptical of Microsoft’s Indie Game program for the 360 since its inception. 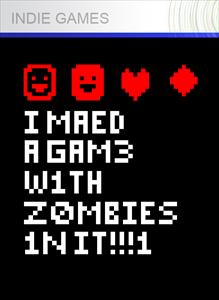 I wasn’t sure what sort of garbage would start turning up if you let the world make video games. How many half-baked bullshit ideas would surface? How many crap games would inexplicably float to the top of the pile, showing off excellent screen shots and delivering on absolutely nothing? How many dumb and repetitive ideas would be presented?
At first, I was convinced that my apprehension was righteous. I would scan through the indie titles in the “most downloaded” section and be treated to the sight of such gems as “Fart Machine – includes 50 different fart effects!”, “Math Tutor”, and approximately 3000 different synth-drum programs so that those of us with a Rock Band bent could pretend we were actually making music.
Though I’m sure there were some gems, I largely left the library undisturbed. I didn’t even bother looking because I felt that there would be nothing good buried under all of that shit.

Then, recently, I started giving indie games more of a chance.

It started with a few awesome flash games, most of them available at armorgames.com including Demolition City, Test Pilot, and Clockwords. These have been my most recent obsessions and have helped me come to the conclusion that indie game creation is a marvelous thing. Why wait for the big companies to try and shove the latest ultra-realistic epic down my throat when there’s plenty of fun to be had in 2-D with simple concepts and clever puzzles? FPS is only fun for so long, I have to take long breaks between RPG Epics that devour my time, and WoW (for me) is played out. I needed something more. I looked to the independent media because anything free and fun, especially in this economy, is well worth the search.

My faith in indie games renewed, I started looking through the X-Box Live Arcade indie games pile again. A few drum machines were still there and almost deterred me from continuing my search for something cheap and fun. I was about to back out of the menu when a game title grabbed my eye.

The title was written on the card in blaring white 8-Bit letters on a black background.
I chuckled. I was intrigued. I decided to check out the screenshots. Looked like a fairly solid game graphically.
I paid my dollar (80 MSP) and hit start thinking I had nothing to lose. For a dollar, I had no idea what I would gain.

Z0MB13S is absolutely awesome.
It’s a 2-Joystick Shooter which harkens back to the days of haunting mall arcades and playing rounds of Smash-TV when the line for Street Fighter II or Mortal Kombat was too long.
You’re set in the center of an open field and zombies start to spawn all around you. You’ve got to shoot and avoid, often jamming the joysticks enthusiastically, to blow away the encroaching hordes.
Power-ups materialize in the form of 4-bit icons, looking out of place but awesome for a game with fair graphics, and offer about a dozen different methods of undead disposal.
From the beginning, it has you laughing. From the l33t-sp34k title card of the game (same as the box) to the soundtrack of the first level – a slow punk song describing the simple objects of the game with a chorus that announces “I made a game with zombies in it!” – its amazingly entertaining.
The game is challenging, as well. As the numbers of the horde increase, you start to feel the pressure, moving around the screen and blasting in every different direction. Different enemies show up through different stages (not all zombie related), each with a different pattern of movement and toughness level. This isn’t what makes the game truly challenging, however.
As you find out when the soundtrack of the first level reaches its chorus, this game uses the surface under your character to flash large messages and introduce different effects. From large 4-bit font words to pure epilepsy inducing black and white and colored flashes, which can get rather distracting. Add to that dance-hall style lights from the edge of the screen while being surrounded by dozens of enemies coming in from every direction and you’re bound to lose a life or two.
I think the way the soundtrack contributes is probably the best thing about this game, though, going from slow punk to metal to an instrumental interlude and even into techno before the game is over. Each stage has its own background, its own effects, and its own enemies to go along with the particular music. The soundtrack is limited, however, which means so are the stages. When you reach the end of the track list (a remix of the first level song), you’ve reached the end of the game. Potentially, the whole thing takes about 15 minutes to reach the very end, if you survive. Perfect, bite-sized, and fun.
The game also incorporates 4-player co-op mode and does not work through LIVE but can be incredibly fun if played by 4 people in the same room.

I defy you not to get the theme song stuck in your head.