I’m currently on Chapter III of Mark Twain’s “The Innocents Abroad”. I’m also about half way through a collection of Sherlock Holmes tales at the same time. I finished reading Treasure Island in a week (which is a good pace for someone very easily distracted) and in my possession on my to-read list is Moby-Dick, The Complete Grimm’s Fairy Tales, The Prince by Machiavelli, as well as some classic re-reads of a few of my favorites (the Thebian Plays, the Odyssey, and Leaves of Grass) and I’m currently searching for more things I should have read by now to devour.

All of this I got for Christmas from my wife.

She certainly didn’t strain herself walking my gift in from the car. I do not have a gigantic stack of books on my desk or my end table in the living room. I am not drowning in a sea of paper. I am not feathering through giant leather-bound volumes. I don’t need to worry about bookmarks falling out or (by way of making me feel old) pulling my glasses down my nose a bit to read finer print at the distance I prefer.

As sketchy as I was about them at first, it turns out that e-Readers are a wonderful thing.
I had thought that having an e-Reader would just be having a narrow-functioned laptop. I had visions of a small flat-panel device which would be just a plain old screen belching out bright white light in the background of the print. I imagined that, while reading with one, my eyes would more than likely begin to water. I reckoned that spending an entire night reading would be much like spending an entire night playing video games; not much blinking, a lot of runny eyes, and probably a headache if sustained for over six hours at a go.
Thankfully, I was wrong. 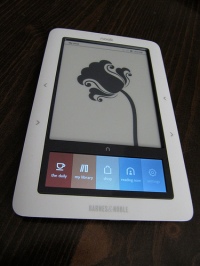 Enter e-Ink screens. e-Ink seems to be more of a repackaged old technology than a new one. That’s not to hold anything against it, mind you, because it’s awesome. It’s vaguely reminiscent of the original Game Boys minus the Baby-Turd Green (Crayola, here I come) background color; black-and-white display, no backlighting. Sure, it’s impossible to read in the dark, but then again, that’s how books are supposed to be.
e-Ink screens make the display look like an actual printed page. So much so that, on my first encounter with an e-Reader on display at Staples, I rubbed my hand across the screen to see if it was a printed paper stuck to the screen or whether the printing was part of the display itself. Deciding that the thing was just a mock-up, I pressed a button. When the screen changed, my jaw hit the floor. A piece of paper had just changed its writing while I was watching. At least, that was what it looked like. From there, I was interested.
I used to be huge into reading but, with many latter-day techno-distractions, I’d all but given it up. Though I constantly wanted to get back into reading, I had a problem with misplacing books. Every time I would buy a book, I would read the first few chapters and, if it didn’t truly hold my interest, it would be put down. Once down, it would usually (after a long period of eventuality) move to the bookshelf in the office room of our house, never to be picked up again.
It was also, most often, uncomfortable for me to have a book open. I found myself annoyed at hand cramps and pinching the spines of hardcover books between my thumb and forefinger. Dust jackets were wasted on me. More often than not, they would wind up hidden away somewhere to be creased and beaten up until found and, sometimes, discarded. I didn’t like that they made my hands slip off the book, so I couldn’t read with it on there.

Having an e-Reader, I started to think, would make me read more often. If I could have something which could potentially be held in one hand, would always be the same size, and would contain an entire library (in case of boredom), I would be more inclined to use it. Also, the fact that it was a gadget by nature would probably keep me more interested in it.

It turns out I was right.

My e-Reader, the Barnes and Noble nook (another victim of the casual discarding or misplacing of capital letters in a proper noun), is freakin’ sweet.
With a price tag around US$260 (not including warrantee), it has already saved me quite a bit of money in books. I’ve been searching for classics I’ve never read and finding that Google Books has an extensive library of public domain available for free which allowed me to download the entirety of my collection thus far without dropping an additional dime.
If you’d like to purchase more recent (or recently classic) titles, they will run you anywhere from a meager $.99 to a more boisterous $9.99. This all depends on the popularity of the book and the writer. New York Times Bestsellers typically run toward the top of the price range while you could purchase, say, the Complete Works of F. Scott Fitzgerald for somewhere near the bottom (shame, that, but still…)
For instance, Stephen King’s latest monster (weighing in at 1000+ pages) would run you around $39.95 for the hardcover. With the nook, you pay $9.99. If this thing isn’t worth its weight in gold to the avid reader, I don’t know what is. The store also contains a few e-Book based newspapers and magazines available as subscriptions. 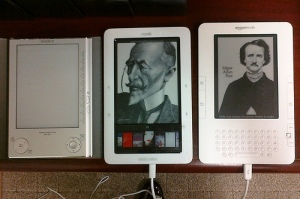 Such a weight in gold might not even be a difference maker. This thing is light. All electronics included, it’s probably less than the weight of the average paperback book. It’s thin and comfortable to handle. The back of the device is covered with a rubbery grip and bowed ever so slightly to make for a more ergonomic experience – it literally feels like you’re holding a thin paperback.
The nook, though probably the least known (and possibly respected) of the Big Three in e-Readers this past holiday season, is probably the most convenient of the three. Consider the 3G Wireless function (at no charge) which connects directly to the B&N e-Book Store whenever you get a notion to browse, feel the need for new literature, or, in my case, remember twenty minutes after your initial thought that you wanted to look for something on the store but now you’re away from home. It can also be used through any wireless network, including B&N’s in-store wi-fi, to conserve battery power.
Speaking of battery power, nook is also the only e-Reader on the market with a replaceable battery. Not sure how to do it yet, but I know it doesn’t require voiding any warrantees.
The nook also lets you interface with friends who have a nook. You can lend a nook friend a purchased book for two weeks, after which it deletes itself. Pretty nice when you’ve got friends with extensive tastes and large libraries.
As far as the large libraries are concerned, the nook has an onboard 2GB hard drive. While that may not sound big by any iPod or hard drive comparisons, realize that I’ve got over a dozen classics measuring no fewer than 200 pages each (some quite a bit longer) including illustrations and my nook still has 98% free space. Text files aren’t large, even when they are long.
The real reason for the hard drive (and the MicroSD expansion slot) is the built-in MP3 player allowing you to read with music or catch an audio book via headphones or the unit’s built in speakers. It’s the only e-Reader with that function, I’m fairly certain.

The biggest thing about the e-Reader boom is that it’s good news for people like yours truly – that being purveyors of the written word. Just when it seemed like print was dead, something comes along to save the day. Or, at least, to try to save the day.
e-Readers, if they really catch on, have the potential to be the new MP3 players. Books may be made available exclusively in e-Book format (there are some e-Serials which are already being produced, much to the thrill of your humble and as-yet-unpublished narrator) making the e-Reader both the most green way to read and a convenient way to carry around an entire library in a relatively tiny package.

Everyone I know love their e-Reader. If you like reading, go get one. The large upfront cost may look intimidating, but consider how much you’ll save paying $10 at max for a book.
I’ll still probably get more important volumes in print, but probably just for collectors reasons.
I can’t wait until you can get comic books on these things.

The future is now!