It having been a while since we last went to the theater (between early January’s Dr. Parnassus and last night’s Alice in Wonderland, about two whole months), I’ve been trying to keep up with the latest trailers for the upcoming summer season via teh interwebz. Trailers are easily one of my favorite parts of the movie experience and I feel almost undressed if someone tells me there’s one out there which I haven’t seen.

I had already seen the teaser trailer for the latest iteration of the Robin Hood franchise when my wife called me to her laptop to check out the first full-length one. Upon simply seeing the title card, I figured this would be an attempt by another studio to squeeze a bit more juice out of a story about revolution, more than likely readjusting the themes and flavor to mirror current governmental displeasures. I also realized that, during this damn near Antarctic-brand of harsh economic environment, it’s the best time to bring back a tale of robbing from the rich and giving to the poor. That way, the poor will shell out their scant loot by the boatload to see the movie so that they might be able to derive some hope with a side of action/adventure from the flick. 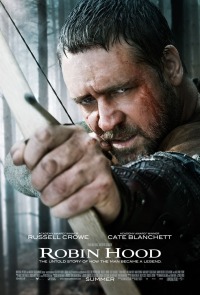 I am a huge fan of the Robin Hood story. I have been since I first saw the Disney animated version (you know, the one with the fox) and Daffy Duck’s “ha ha, ho ho, guard, parry, thrust, spin” Looney Tunes version (one of the all-time classics).
I’ve seen Kevin Costner do the part in an American accent while Alan Rickman stole the entire movie. I’ve seen Mel Brooks tear it down as he introduced us to Dave Chapelle. My wife and I were devout followers of the modernized BBC version which only recently concluded last summer after three seasons. We didn’t want it to end, but there’s really only so much to the legend.

So, upon seeing that a new Robin Hood was being released, and my finding out that it was to be helmed by Ridley Scott, I was mildly excited, though as described above, I thought I knew what to expect.

The characters of the Robin Hood legend, more than any other re-hashed and repackaged story, always seem to be a poignant reflection of modern ideals. Directors always use the same story and the same names, but the characterization is always slanted toward what people want, both in pop-culture in the real world. It’s an interesting paradigm.
Every decade has had at least one Robin Hood movie or TV show since a silent film in 1908 titled “Robin Hood and His Merry Men”. Every incarnation is slightly different than the last. Of any story ever told, Robin Hood and Marian are consistently used as a barometer for the times.

Seeing as this is the first theatrically-released Robin Hood since 1993’s Men in Tights and the first serious take since 1991’s Prince of Thieves, the film will deserve analysis. I figured I’d start mine early. 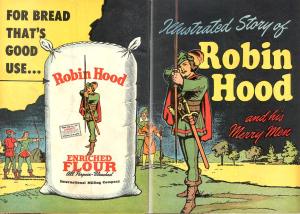 I found out quickly that Russell Crowe stars. Ok, I thought, maybe this won’t be a tragedy. He’ll add some age and grit to a typically young role. Teaser clips showed him commanding an army and making loud, gruff-voiced, inspiring battle speeches to cheering masses of warriors, which is always pretty awesome. He can kick ass in a period action flick.
He’s not the clean-cut Errol Flynn type. He’s not even the sarcastic pretty-boy Kevin Costner type. He appears in the trailers as a stubble-faced, down-and-dirty freedom fighter; an inspiring leader who rallies not just a group of bandits, but the entire populous, to rise against Prince John and the corruption of the government. Probably doesn’t hurt in this environment to see people being pissed off about the government taking all of their money, either.
Someone looking as the salt of the earth leading average citizens to a victory over a twisted monarchy is what’s going to hit it big right now. That’s what the people want to see in the eyes of the studio and the director. Not entirely an incorrect assumption and, with the right marketing, Crowe’s portrayal could send this movie far over the top.

I also discovered, through the full-length trailer, that Cate Blanchett is playing Lady Marian. I’ve had to turn it over in my mind a few times. I was expecting someone younger to play a role traditionally associated with the title of “Maid”, as in, young maiden. It’s a bold choice for the role to be sure. Blanchett’s characters typically dominate the movies that she’s in. If she’s not the star, she’s a definite show stealer. You don’t get to be a multi-award winning, multi-Oscar nominee by being forever the wilting flower.
It seems that in most recent depictions of Robin Hood, Marian’s role has continued to grow. Over the years, she’s gone from being a helpless damsel in distress to an ass-kicking addition to the Sherwood Bandits, most notably the character’s turn as the Night Watchman in the latter 00’s BBC series.
If they’ve got Cate Blanchett playing the role, then Marian is going to be a very strong character. She may not physically kick ass when this movie drops, but she’s going to be a larger-than-life presence. Certainly no damsel in distress.
I hate the buzzword they’ve been using in the media to describe a race or gender being the first to do something, by the way. I fully support the idea behind it, I just hate the words used to describe it. I refuse to put those two words together out of irritation. If I did use that term, I would say that this character will be poised to inspire more women to *ahem* pressure the area at the top of a room which is made of transparent material until it is sufficiently destroyed.
My vow will not be broken.

The movie has mass explosive potential on both ends. Either it will blow up, or it’ll bomb. Either way, I’ll probably still end up seeing it, and not for the sociological reasons listed here. My wife and I love Robin Hood. We’re bound by pop-culture law to see it. Even if the thing does suck, it’ll still be worth it to see how Ridley Scott defines the characters for this decade. Good or bad, you can expect my honest opinion upon viewing.