I spent more than a few minutes than normal on facial grooming today. I was slightly more meticulous, paying special attention to the length of the goatee and moustache which have adorned my face for more than a decade. Most of the time, I am less than careful about this. I allow my goatee to grow to lengths normally reserved for the late Captain Lou Albano. My moustache has never quite bordered on Wilford Brimley territory, but it’s gotten close.

Why make such an event of one particular shaving session? Why make so certain that it is done today and done just so?

Today, my friends, is the beginning of a (hopefully) long march. One which my blood pressure dreads being made again so soon. A slogging grind which will be almost as gruelling for the spectators as it is for those actually participating.
After today, some of us will obsess. Some of us will dissolve our lives temporarily out of anxiety and anticipation. Some of us… will grow beards.

As the NHL playoff matchups are settled with today’s dramatic conclusion, people like myself are shaving and starting fresh; hoping that, when our team reaches total victory, we have growth on our face enough to make al Qaida jealous. 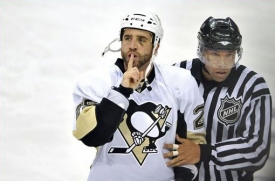 The playoff beard is one of hockey’s most vaunted traditions. It’s right up there with fighting, toothlessness, and the usage of “eh” as punctuation. At first, it was a tradition started by the players. Currently, it is a superstition carried over to the fans.
In cities all over the NHL, men just like me paid tribute to the Hockey Gods by removing any winter growth from our faces and giving superstition a clean slate. We all hope that we won’t be shaving until the end of June.

For some of us, the journey will be over sooner rather than later. Some of us will carry our stubbled faces low to the sink before April is out in search of our razors while others soldier on.
For those of us among the fraternity of the bearded, it is a religious experience. Much like hasedic Jews, no one looks twice at a hockey fan rocking a full and thick beard at the onset of summer. If it’s 90 degrees and your team is in the playoffs, it is a true test of your devotion to let that bad boy keep growing.
I was torn two years ago when my wedding day coincided with game one of the Stanley Cup Finals. I had to shave or my waiting wife to be would have had my bearded head on a pike.
My offense to the Hockey Gods (including missing the rest of the round while on a cruise ship in the middle of the Mediterranian) felt like it cost the Pens their victory. I was lucky enough not to have as many commitments the following year and the Hockey Gods were pleased.

This example proved to me the seriousness of the superstition. And so, I join my fraternity again. I band with my bearded religious order in observing our annual penance. I may not like them if they are from an opposing faction, but I see their faces and I know who they are. I may hate them, but I respect their zeal for it nearly matches my own.

All that being said, I masochistically look forward to the sleepless nights, the cardiac moments, the breathless seconds, the extra-strength heartburn, and the anxiety that comes between.