It’s rare that I speak about politics anymore.

For those of you that have been following this blog for the last near-decade, you know I used to be very passionate about things. At every turn, I was kicking and screaming about something. Mostly, it was railing against the Bush White House as so many twenty-somethings were wont to do. I may have blamed W’s cadre of super-villains for quite a bit of trouble, but I never did anything aside from state the obvious. Politicians suck. The general state of politics suck. I don’t care what party you’re from, what side you consider yourself, or what your orientation toward that side may be, it’s the truth.

The right hates what the left is doing and vice versa. It’s not a perfect system by anyone’s line of thinking. If the system were perfect, i.e., all things to all people at all times, then it would cease to function properly.
In other words, either side without its rival would lead to the collapse of democracy. Without another choice or another opinion or another angle, there would be no reason to vote.

This scenario is no doubt desirable by the extremists on either side of the fence. However, those far right/far left-ites are comparatively few when looked at in the bigger picture. They are, obviously, more vocal about their beliefs and, therefore, make themselves appear larger in number when they are able to gather a crowd. Typically, they come waving signs and screaming chants about one thing or another. Pro-Red Agenda, Pro-Blue Agenda, doesn’t matter.

Though I may have been passionate about a few things in the past, in recent years, I’ve found that I’ve fallen into the ever-growing completely disenchanted demographic. If we had to choose a color to represent our political beliefs, it would probably be grey – meaning more dull and uncaring than neutral or even midlined. 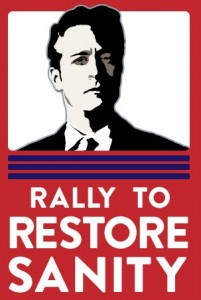 It’s my fellow disenchanted masses who should take notice and mobilize. Or not. Whatever. It’s not like we really care.

Jon Stewart, the spokesman of the disenchanted political dissidents, is calling for a rally. This is, of course, mostly a slap in the face to Glenn Beck, who has said that Stewart and Colbert are tools of a left-wing agenda.
I suppose you can’t really call it a rally, as I don’t know if the point is to be fired up or not.

Says Stewart: “You may be asking yourself at home, right now, ‘But, am I the type of person who should go to this rally?’ The fact that you would even stop to ask yourself that question, as opposed to just, let’s say, jumping up, grabbing the nearest stack of holy books, strapping on a diaper and just pointing your car toward D.C. — that means I think you might just be right for it.”

Of course, Colbert has to stage a “counter” rally, “pitting himself against” Stewart calling his the March to Keep Fear Alive, calling Stewart out on his efforts to promote sanity during a recession.

Will either of these events draw a ton of people? Is it possible that more people could show at this rally than at either the Beck rally or the counter-held Sharpton rally at the same time?
I’m willing to bet that, between Stewart and Colbert, allowing more than a month to organize, hype, and prepare, they’re going to fill the National Mall.

Jon Stewart might even get his Million Moderate March in true number, though that one’s sort of doubtful. I think the main problem is to get the Grey Party motivated enough to take a day trip (or weekend) to DC. If I had the cash, I’d totally hit it up. Though, I have a few people I could crash with. Maybe it’s time to cash in.

I’ll be the one in the crowd wearing the “Mario/Luigi ’08 (it’sa-merica!)” t-shirt and carrying the giant sign that says “Meh.” Other sign suggestions from Stewart included “911 was an outside job.” He’s also promised to have pre-made signs for those of us who don’t feel motivated enough to make them on their own.

The strange twist is that people will probably get motivated about a movement to remain unmotivated.

I’m all about the contradiction.

This may be the single greatest display of unified political apathy ever assembled.