Twenty-five years ago today, the most groundbreaking research project of the Twentieth Century culminated with an unprecedented result.

It all began fifty-five years ago (this November) when one of the most brilliant scientists of our age had his Newton moment. He was in his bathroom hanging a clock on the wall when he slipped and hit his head. Immediately upon waking, he was inspired to draw a quick diagram for what would become the single greatest discovery in the history of science.

From there, he devoted his life to this project. His vast family fortune tapped while acquiring the necessary components to create his masterpiece, he was forced to sell his palatial mansion in southern California and took up residence in his garage, where he could continue his work uninhibited.

He continued to tinker with other things in the meantime in order to satisfy his need to create. He was especially fond of Rube Goldberg-style contraptions to help shorten his morning routine. This, however, seemed pointless as his habits usually had him up all night or out of bed before the start of the device would be triggered.

When his great work was finally completed, thirty years after his initial epiphany, the last piece of the puzzle still remained. This part is where his legacy becomes a bit tarnished.

In order to power his device, he required a nuclear reaction. As nuclear material isn’t exactly available at every corner drug store, he was forced to make a deal with a group of Libyan Nationals who provided him the material with the promise that he would build them a nuke. Instead of building their device, he gave them a dud which was simply a bomb casing filled with old pinball machine parts.

With the power source in place, at precisely 1:20 AM the morning of October 26, 1985, in the parking lot of a shopping mall, his dog became the world’s first time traveler by jumping instantly one minute into the future. This was later followed by numerous trips both to the past and to the future by the scientist and his friends.

Today, we salute you, Dr. Emmett L. Brown. Thank you for your work, whenever you are.

Now that the history lesson is over…

We are now 4 years and 360 days away from when Doc and Marty arrive in the future (October 21, 2015). Let’s take a minute to look over what we’ve seen in the future and how we’re progressing so far. Here are seven things from the future and where we are in accordance to Back to the Future.

[note: I know there are a ton of other sites more official than this one doing this exercise, but, come on, wouldn’t you rather hear this stuff from me? I’m a lot more fun than random news websites.]

1. Flying Cars. Some huge breakthrough not withstanding, this probably won’t happen within our lifetime if ever, let alone by 2015.
As awesome as it would be to essentially have a straight-line, high-altitude path to anywhere we wanted to go, I don’t think we’ll ever be ready for it. We have enough trouble negotiating road traffic let alone air traffic. Think about some d-bag cutting you off at a couple hundred miles an hour while you’re a couple thousand feet in the air. Think about the collateral damage from all the mid-air collisions. Bad drivers? Imagine bad flyers.

Likelihood of it happening: Yeah, right.

2. The TV/Phone/Entertainment System. As seen in the McFlys’ Hilldale home, a large flat screen capable of receiving video-phone calls as well as granting the ability to view multiple channels at once.
Yeah. We has it. As costs decrease, giant flat-panel TVs of all variety are becoming commonplace within today’s home. With services like Skype coming to the forefront, video calling is becoming easier by the day. When you consider the continuing integration of internet accessibility into cable/satellite systems, gaming systems, and even some newer TV models, the only big difference between what the McFlys had and what we have now was that theirs wasn’t hi-def. Even that’s debatable because theirs was reproduced using early 90s tech as the backbone. Things like the Sony Eyetoy and the Xbox Kinect are making the idea of video calls much simpler.

3. The obsolescence of arcade games/hands-free gaming. Remember that scene in the Café 80s where Marty gets whined at by a couple of snot-nosed brats (one of which was Elijah Wood) about the fact that Wild Gunman required the use of hands to play? Remember that one of them said: “My dad told me about these…”
Yeah. For reals.
Sure, our kids MIGHT know what old school arcades were like if only for the intervention of Dave and Busters and numerous amusement parks keeping the old cabinet industry going. Honestly, though, it sure is a panda of a thing (as in not quite extinct but extremely close and usually only found in captivity).
With console graphics matching or outclassing anything that could be in a cabinet and online multiplayer replacing the public grudge matches of the old school video game dens, there really is no point in leaving your house to show off your skills. Our children will have to be told tales of putting a token/quarter on the ledge to signify that we “got next”.
As far as using your hands, with Wii, PSMove, and Xbox Kinect, we’re already there. I’m pretty sure it’s more than a kitschy gimmick at this point considering its popularity, so we can only expect more advances in motion control/controller-free gaming as things go on. By 2015, games with controllers may indeed be a baby’s toy.

4. Holographic movies. Sure, Jaws didn’t make it to as many sequels as depicted, but in 2015, you could see him jump right out and bite you, even though Marty thought the shark still looked fake.
With the triumphant (though, I still believe, unnecessary) return of 3D to the silver screen and the addition of IMAX 3D, we’re getting close, but this stuff is still pretty far off. 2015? Probably not. 2025? Maybe a bit more likely. I’m not predicting that we’re going to find the key to mass-marketable holographic recording and replaying within the next five years. I’m sure we’ll find some consumer friendly alternatives, possibly involving a VR-type setup, but I don’t think that has what it takes to survive a mass market right now. Too much expensive equipment involved.

Likelihood of it happening: Maybe.

5. Thumbprint identification. In 2015, there’s no need to carry a wallet. Your thumbprint pays for things like a debit card, can identify you by name, address, and age, and even works as a key to locked doors.
Biometrics is coming along just fine. Thumbprints are already used in some time clocks to punch employees in and out. It’s only a matter of time before all of the debit card swiping progresses. We’ve already got credit cards you can just wave in front of an RFID box to pay. Next, in my opinion, will either be the BttF solution of biometrics or the Demolition Man solution of chips under the skin.
Welcome home, Jennifer.

Likelihood of it happening: Plausable.

6. Hoverboards. Much like the flying car gambit, the hoverboard thing is reliant on some huge breakthrough happening within the next five years.
Great concept, but also not something I think we’re going to see in our lifetime. It stands to reason that, if flying cars go through, the trickle down will certainly involve the tech being put into toys. The hoverboard is an inevitability, especially if someone from our generation is still around when they’re able to be made. Anyone who’s seen BttF2 wants a hoverboard.
I don’t believe hoverboards will ever fully replace skateboards, especially not with the latter-day popularity explosion of pro-skating. Hoverboard may get it’s own slot in the X-Games, but it certainly won’t be to replace old-school wheels.
And, if there ever are hoverboards, I don’t think there will be a Pit Bull. Rocket engines strapped to vehicles that shouldn’t have rocket engines never end well.

Likelihood of it happening: As good as flying cars.

7. Robots. The future was full of them: the full-service gas station, the wait-staff of the Café 80s, even a dog-walker in Hilldale.
This, I believe, is the longest way off. Not based on technology, because we’ve reached the point where we can build robots akin to these. Note the medical bots that help doctors round when they’re not present.
The tech is certainly there. It’s the willingness of the people to accept it, especially in a ruined economy. I think people would take a South Park style stand against robot labor. They may help us live comfortably, but dammit, THEY TOOK OUR JOBS!!! (dicker-doo!) 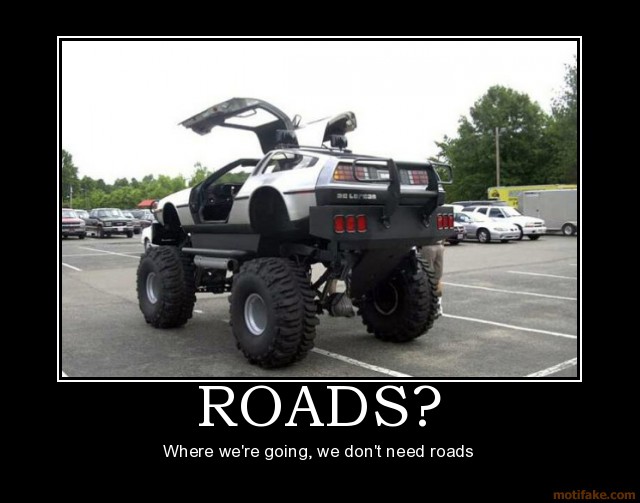 With that, I’m gonna make like a tree and get out of here.