The first time it drew any attention in the media was with a black polybag.

Emblazoned on said bag was the familiar red S logo, dripping with blood.

Inside, the grand conclusion to a comic book event which shattered records: The Death of Superman.

It was the first title-character death to be covered by the national media. It became as much an event as the death of any other celebrity. There were obits on the national news describing the life, career, and cause of death, profiles of his family and friends, and a rudimentary analysis of his killer. 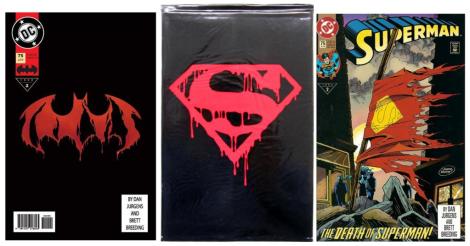 I purchased a copy, but not the black polybagged version (I refused to line up all day for anything Superman related). I wanted to see the Man of Steel beaten to a pulp at the hands of Doomsday. I have the iconic final splash page of Lois Lane cradling the Supercorpse as she wept openly, his tattered cape, torn from his costume and attached to some random debris, flying like a flag in the background.

I was overjoyed. Superman; as much my own arch-nemesis as he is to Lex Luthor or Braniac, was dead. My problem with Superman was, at least temporarily, cured.
My hatred wasn’t just quelled because he had shuffled off this mortal coil to much fanfare. It wasn’t only healed by attempting to lick the tasty tears of anguish from the page as Lois cried a true love’s mourning. Those things both helped. But the root of the anger and issue I had with Superman was almost immediately repaired upon his demise.

Some may ask, why would anyone have a problem with Superman? I mean, he saves the day. He’s the ultimate white knight of comics. How could anyone argue with something as wholesome and all-American as Superman?

My response can be summed up in three words: Superman. Is. Boring. My reasoning for this is lengthy and logical and certainly for another rant at another time. I’m already going to keep you a while as it is, you don’t need me prattling on about why Superman’s books have sucked since before time began.

His death served to stem my bleeding rage, healing me as he crept closer to that inevitable scene alluded to by the black polybag.
Finally, something beat the absolute living shit out of Superman. The bony protrusions and relentless attacks of Doomsday cut him, forcing him to see his own blood in who knows how long. He gave Supes a puffy black eye, broken bones, and gashes through his invulnerable skin. By the time Lois cradled his head in her distress, he was like a Snickers bar left out in the sun; a bunch of lumpy mush loosely contained within a wrapper.
The race was quickly on to replace him, bringing Superboy back into the fray on a more hardcore level, and introducing Steel, Hank Henshaw (the Cyborg Superman), and the Eradicator. Great plot lines unraveled as the ripple of Superman’s death stretched to the farthest reaches of the DCU. It made the book relevant. What would the DCU be like without Superman around to save the day? We were on the verge of truly finding out.
Then, of course, within a year, they turn around and bring him back, putting an end to anything interesting that might have happened had the Corpse of Steel remained six-feet under. Welcome back to the doldrums.

The reason I’m waxing nostalgic about the Death of Superman storyline is that Marvel recently announced a similar event which reached the national media (if you count USA Today as a viable source, that is).

Shaking up the status quo of a comic which has been running since what seems like the beginning of time by killing off the cast isn’t really something groundbreaking. Even eliminating a main character is becoming passé. Without revealing any spoilers from the article, the fated character dies, essentially splitting up the team to make them free to do other things and pretty much ending the 500+ issue publication. The cover alone caught my attention, as it vaguely resembles the infamous black polybag; it is a simple black cover with the team’s logo front and center, using a 3 instead 4. Simple, ominous, and effective.
I was a fringe fan of the Fantastic Four, usually only coming back to the story when Doom was involved, but I still find it enthralling that one of them will bite it as well as the fact that Marvel has its plans in motion for the survivors. If things go well, this one may stay dead, which would be a truly ballsy coup and would have a lasting effect on Marvel’s First Family.
They were already blown apart once when their opinions were split on the Superhero Registration Act during Civil War, now the giant wedge of death may permanently cleave them apart. It will be interesting to see how things develop, especially since the remaining three have other things to keep them busy. Will they ever be a family again? Will there be resentment or buried rage over the death? To me, the emotional nuance of superhero comics has always been fascinating. Marvel usually does this better than DC.

Death in comics is usually taken about as seriously as death in soap operas. Characters will always find a way back into the plot. No character, no matter how brutally or poignantly they may have perished, is ever truly marked for permanent death.

One of the most notorious examples comes from Batman.
Jason Todd, the second Robin, replacing the outgoing and outgrowing Dick Grayson, who decided on a better career under the name Nightwing and running with the Teen Titans, was savagely beaten to death with a crowbar by the Joker. The incident provided the Dark Knight with anger, regret, fear, temptation… an entire gambit of emotions not normally reflected by the stalwart hero. It also helped the book transition into the modern age, the death of Jason Todd symbolizing the death of innocence within the Batman comics as a whole. It forever affected the partner relationship and heavily influenced Batman’s treatment of Tim Drake, the third Robin, and the development of their relationship. Granted, Todd really died as the result of a reader’s poll, but the writers thought it would be a horrible slight to the readers (who voted Todd dead) if they brought the character back shortly after.
It was believed since the 1989 death of Todd that he would never be reintroduced, as the death was far too significant for the comic.
Of course, Todd was resurrected (courtesy of “reality punching”, DC’s Infinite Crisis-based panacea for all ret-conning). Clayface, posing as Todd during the Hush storyline, offered fans the jaw-dropping moment in 2003, but it wouldn’t be until 2005 that the actual Todd rose from the grave to cause trouble. He also had a pretty big role during the Battle for the Cowl mini-series while Bruce Wayne was (ironically) “dead”.

Can anyone in comics stay dead? Is it simple popularity that brings them back to life?

Bruce Wayne, as mentioned, was killed via Darkseid’s Omega Sanction. Turns out he was just unstuck from time and sent back to the stone age. He had to crawl his whole way back to the present through the strangest means possible, all the while regaining his memories.
This had me, as a fan, worried because the new Batman and Robin, Dick Grayson and Damian Wayne (Bruce’s son via Talia al Ghul), were performing incredibly within the scope of the comic. It was a truly fresh look at the Dynamic Duo. Thankfully, when Bruce returned he immediately spun off into Batman, Inc. – a story about Bruce taking Batman global – leaving Dick and Damian in charge of Gotham while he’s fighting for the greater good. We can continue to watch Dick as he carves his path as the new Batman and Bruce can still be King High Bad Ass. Disaster averted.

Captain America was shot dead after being arrested for violation of the Superhuman Registration Act at the end of the Civil War storyline. James “Bucky” Buchanan, aka the Winter Soldier and Cap’s old sidekick, picked up the mantle and took things to the next level.
Of course, Cap was also simply unstuck from time, forced to battle his way back to the present through… wait, didn’t I write this sentence already? Well, Marvel did it first this time.
Anyway, Steve Rogers, the original Cap, makes it back and steps aside, much like Bruce, to become the new head of SHIELD, America’s “top cop” as it were, and is simply known as Captain Steve Rogers, leaving his patriotic moniker to Bucky.

Both instances marked permanent changes for the namesake heroes, changing the men behind the masks but without the actual carnage of leaving the original heroes buried and rotting. We achieve change without death, but what does this really mean for the characters involved?
Are we not allowed to see a mournful superhero? Would it jeopardize our concept of the traditional super hero comic to see an exhibition of emotion that wasn’t related to being a total crime-fighting, world-saving badass? Will the popularity of the originals versus the infusion of new blood only serve to briefly shake and reestablish the status quo? Can a hero ever stay dead, be mourned, be memorialized, and have the world move on?

If Marvel had any balls, they would test the waters with the F4 member who is about to bite it and mandate that he remain dead. I mean, Ares died in the Siege storyline when he was torn in half (literally) by the Sentry, who was then put down by Thor (lightning bolt to the head). Those two have been dead for a good six months or so now and I’m pretty sure they’re going to stay that way. I have hope that Marvel is learning it’s ok to kill. It’s ok to let some heroes reach their final rest (excluding Magneto and Jean Grey, of course). How long until other publishers follow suit?

In my story (that being Unlucky 7), when you’re dead, you stay dead. (just ask Wearing Hudsucker)

Any thoughts on this? Any answers to my queries? What’s your opinion? Just something to think about while you’re slowly being snowed in this winter.