What would you do if you were granted super powers?

You may have lofty ambitions of becoming one of the world’s finest heroes. You may dream of becoming a villainous tormentor of society. These aspirations would be wonderful for a world dedicated to comic-book action but what about the reality of the situation? In the real world, if you took either of those paths, you could expect to run into the wrong end of a gun and draw your super-powered career to a very untimely close. 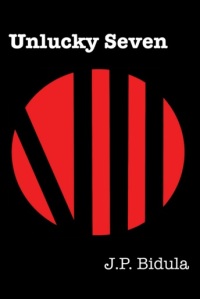 Unlucky Seven is a novel that shines a glaring light on the writing between the lines of the typical superhero origin story.

When a bunch of twenty-something geeky slackers are suddenly granted abilities beyond their comprehension they must decide for themselves whether to become a force of good, evil, or apathy as they become embroiled in a self-aware romp through every pop-culture trope about superheroes that was ever invented.

They are forced to deal with commitment to a cause which has no tangible goal in a real-world setting where super powers only exist on the page or the screen. With no real direction and no supervillains to fight, they struggle with this life-changing event and all the baggage, real or imaginary, that comes with it.

Using their combined understanding of pop-culture and geekdom, they set out on a quest to do… something, I don’t know, they were really kind of meh about everything. You’ll get what I’m saying once you stop reading this and start reading the story.

Meanwhile, a dark and shadowy agency known only as The Project watches them from afar, waiting for them to make that inevitable huge mistake, and itching for a conflict.

This satirical adventure through the superhero genre has the feel of “Arrested Development meets the Avengers” which was the coolest tagline that the author could come up with. Anyone obsessed with pop-culture will appreciate the vastly self-aware humor injected into the obviously twisty and only faintly serious narrative. No need to call out the way this thing is going to turn. Chances are, the characters have already done that for you.

The life of a superhero is so bland when you can see everything coming from a mile away. It only gives you more time to laugh at it.

Have a suggestion? Want to tell me what you think of the Uni7erse? I am available! Tell me all about it!